The parameters for development were set: the Army wanted a .22-caliber projectile that would stay supersonic out to 500 yards, and capable of penetrating a U.S. Army steel helmet on at least one side at that distance.

The .222 Rem. didn’t quite make the cut, as the case capacity didn’t generate enough muzzle velocity and goes transonic before 500 yards, but made a good starting point for cartridge development.

Springfield Armory’s Earle Harvey lengthened the triple-deuce case and shortened the neck, developing what would be released as the .222 Rem. Mag., but changing priorities at Springfield forced Harvey to abandon the project.

Robert Hutton—then Technical Editor for Guns & Ammo magazine—worked with Gene Stoner to develop a cartridge that would deliver the 3300 fps of muzzle velocity needed to keep the 55-grain bullet supersonic out to 500, and the resulting cartridge is what we know as the .223 Rem., or the 5.56mm NATO.

The cartridge was introduced to soldiers during the Vietnam War, and has been our mainstay since that time.

I’m sure you’re aware that I am the guy who included the .223 in a list of overrated cartridges, but if you read the piece, I wasn’t totally slamming the design. It is faster than the .222, yet not as fast as the .22-250 Rem., and that’s not a bad place to be at all.

Some folks swear it’s a miracle writ in brass; while I don’t quite go that far, I do know it is plenty fast enough and plenty accurate enough to get the job done, especially on varmints and predators.

Though I am a staunch .22-250 fan—there’s just something about that cartridge that I downright love—a .223 Rem. has some features that actually outshine the .22-250; specifically the twist rate.

I’m aware that the developers of the .22 centerfires probably never envisioned these cartridges being used for deer and similar sized game, and therefore gave the .22-250 a twist rate—predominately 1:12” or 1:14”—just fast enough to stabilize the 55-grain bullets.

But the .223 often uses a 1:8” or 1:10” twist rate, and if so equipped can and will take full advantage of the heavier bullets available today.

Certainly there were and are rifles produced with a slower 1:12” twist, but some modern guns have the faster twist for heavier bullets.

It requires precise shot placement (isn’t that always a requirement?) but will definitely make meat. Those heavy bullets, in spite of a lower muzzle velocity, are a blessing on truly windy days, as the higher Ballistic Coefficient helps to cut down the effect of wind deflection.

If you’ve ever hunted prairie dogs on a good windy day, you know how much a bullet can be blown off course.

Just be sure and check the twist rate of your rifle or any rifle you intend to purchase. 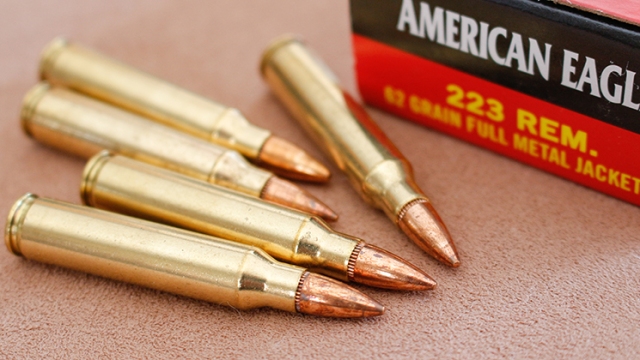 The .223 Rem. is also an efficient cartridge in comparison to some of the bigger cased .22 centerfires.

It will run on less than 30-grains of powder with the common 55-grain bullets, and the sheer volume of available brass makes it the reloader’s friend.

Its 25-degree shoulder offers good headspacing, and in a properly tuned bolt-action rifle it is capable of hair-splitting accuracy.

My father has a bull-barreled Savage rifle that is a true tack driver when using the 52-grain Sierra boat tail MatchKing, giving 1/3 MOA accuracy out to 300 yards—the farthest we’ve tested it.

This makes for a great prairie dog gun, as well as being perfect for head shots on furbearers. I’ve also seen ARs that will print equally impressive groups.

If you enjoy high volume shooting on a budget, the .223 Rem. should scream out to you.

There are oodles of surplus military ammunition, as well as affordable bulk ammunition available to the budget-minded shooter.

There are match loads, for the target crowd; there are highly frangible bullets for the varmint/predator hunters, as well as those premium projectiles for those who choose to pursue larger game.

The .223 works just fine in the bolt guns, and obviously in the AR platform, but also equally well in the Ruger Mini-14 and other autoloaders.

Being a military cartridge almost guarantees wide acceptance among the hunting and shooting world; with the exception of the .30-40 Krag—becoming a rarity these days—almost all of our military metallic cartridges are still thriving.

The 5.56 NATO is dimensionally identical to the .223—though the leade is different in the military version—and made its debut during the Vietnam War.

Though it has caught on since then, many of my older veteran friends who served in Southeast Asia still refer to the AR-15 as the ‘Mattel Toy’, and some go so far as to refuse to shoot the ‘damned little round.’

The 5.56mm ammunition is loaded to a higher pressure than the .223 Remington sporting ammunition; it is safe to fire .223 ammunition is a 5.56 chamber, but the reverse is not safe.

The .223 Rem. has earned its place in the hunting and shooting world; it’s a fun round to shoot, having very little recoil, and is a great teaching tool to break new shooters into the centerfire rifle world.

It is a perfect choice for any furbearer or varmint, and while it may not be the optimal deer rifle, it will work.

If you’ve got a .223 rifle, take some time to experiment with the performance of the different bullet weights available; if you don’t have a .223, it’s high time you added one to the collection.

Lähde: An Ode to the .223 Remington | American Hunter