Classic salmon fly: the art and the history | The Field

Michael Radencich traces the evolution of the classic salmon fly, through years of literature and lithography. 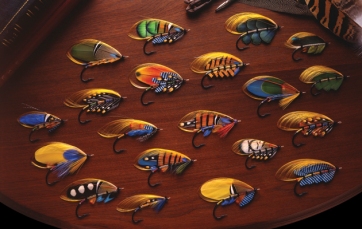 A classic salmon fly has more than two centuries of history behind it.

And is still evolving. Megan Boyd was known for tying exquisite salmon flies, watch the video of her working at salmon flies and fly-tying.

Or take some practical advice on landing your fish from Mike Daunt’s how to catch a salmon video. But if you really want to know how something about the history of the classic salmon fly, expert Michael Radencich has the answer.

Whenever I sit down to tie a classic salmon fly – and I’ve been doing this for 25 years now – I can’t help but make a connection or, one might say, a comparison with classical music because both of these artistic expressions have a long, ever-evolving history.

The legacy of the classic salmon fly spans more than 200 years, starting in the British Isles, and has been documented in books since the beginning of the 19th century with, I’m glad to say, no end in sight.

In a way, discovering these books became a sort of treasure hunt for me as I found and admired their beautiful, hand-coloured plates. Since I am more artist than writer, it was not at all surprising that I became enamoured of these colourful paintings and how they were made.

Hand-coloured engravings came into being early in the 19th century and this was the only method available to publishers of books containing coloured illustrations until around the 1860s, when chromolithography (patented in France around 1837) began to supplant the process of painting hundreds or even thousands of plates by hand.

Now, I must say I’m not a historian but I have pored over many, if not most, of the books written about the salmon fly – especially those with the aforementioned hand-coloured engravings, which apparently began with Daniel’s Rural Sports in a special, de-luxe, leather-bound, three-volume set published in 1804 that I once had the distinct pleasure to own.

This set of books sported many beautiful, hand-coloured plates covering a wide range of sporting interests including hunting, fishing, horsemanship and so on. One of the plates displayed a finely rendered Atlantic salmon along with two classic salmon flies (see above).

From what I understand – although I can’t prove it – this may have been the first hand-coloured plate of salmon flies ever published. We will have to leave it up to the historians to verify this claim but it was still quite a thrill to come across this engraving.

It wasn’t long before more books came forth with many colourful, hand-painted etchings – some realistic and faithful to the fly subjects and some with a more creative or stylistic approach.

Easily the finest renderings came from the Adlard brothers whose work graced Jones’s Guide to Norway, and Salmon-fisher’s Pocket Companion (1848). This contained eight stunning coloured plates of which “The Major” (below) is my favourite from all the books I’ve perused.

Other works illustrated by the Adlards include Ephemera’s (Edward Fitzgibbon’s) The Book of the Salmon (1850), Francis Francis’s A Book on Angling (six editions, 1867-1885) and Hewett Wheatley’s wonderful little book, The Rod and Line (1849).

Of all the rare books containing hand-coloured plates, those with the brothers’ engravings were the most accurate by far in my opinion but that is not to denigrate the fine engravings in other books, especially William Blacker’s Art of Fly Making (1855), which contains 22 engravings – 18 of which are coloured – delineating the salmon and trout fly patterns he extols.

I’ve found tying the “Blacker 15” flies to be some of the most challenging due to the vagueness of some of the pattern recipe descriptions, yet rewarding to explore (photograph overleaf). Blacker’s earlier book, Art of Angling (1842), covered fly-tying and feather-dyeing techniques but he is best known for the 1855 work.

An example of one of Blacker’s patterns less specific as to materials can be found with his description of a fly he received from his friend McPherson Grant. The pattern – No 15 in his group of salmon flies – is as follows (page 177 in his book): “The body of the fly was made of yellow silk, red cock’s hackle, toucan tail ribbed with gold [it is assumed he meant the ribbing to be on the body], jay at the shoulder, a neat gaudily mixed wing, feelers of blue and yellow macaw, and a small black head.” 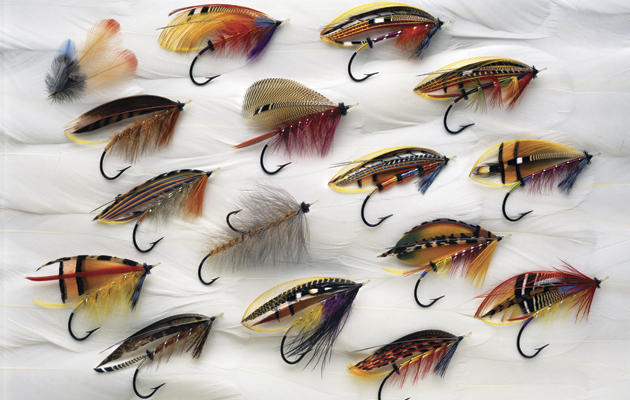 With no definitive description of what materials should be used for the wing, I liken it to a cadenza in a classical music concerto that allows a soloist to use his or her imagination to fill in the blanks while performing that passage.

The cadenza, usually played at the end of the concerto, is meant to be an improvised, ornamental piece enabling the soloist to strut his or her stuff as a virtuoso. So I’m sure Blacker wanted us to tie this pattern with a suitable, gaudy cadenza wing.

Written by the Revd Henry Newland and published prior to Blacker’s work is an interesting little book on the classic salmon fly simply called The Erne (1851); its subtitle reads, Its Legends and Its Fly Fishing.

This book boasted a single plate of hand-coloured engravings of snelled salmon flies. Even more interesting is “The Fairy Fly” gracing the title page.

This fly depicts a beautiful woman riding a giant salmon hook or, perhaps, a tiny sprite riding a normal-sized hook – the imagination runs wild. And published just two years after Newland’s work was an offering by Thomas Tod Stoddart called The Angler’s Companion, which explored the rivers and lochs of Scotland.

It should be noted that many if not most of these 19th-century fishing books were not dedicated to the classic salmon fly alone, they also included copious amounts of information on trout fishing and trout fly-tying. Stoddart’s treatise was no exception, yet on page 171 of the Companion is a single plate of six salmon flies – hand-coloured, of course – and these appear to be simple strip-wing flies meant to be fished on Tweed. 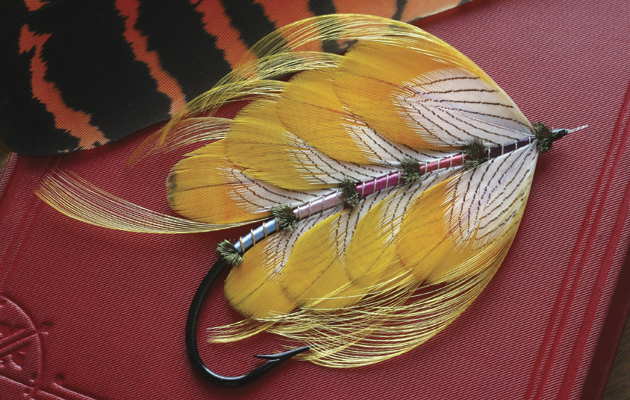 As the classic salmon fly evolved, so did the artistry of the etchings. The later works began to include fly plates produced by the chromolithograph technique mentioned earlier.

An interesting example of a book containing stylistic chromolitho plates of the classic salmon fly is Fraser Sandeman’s By Hook and By Crook (1894). Starting on page 96, there are five fly plates along with pattern recipes and these fly renditions, although hardly realistic, are quite beautiful and almost ethereal. It appears that Sandeman gave the artist quite a lot of creative freedom.

Of course, there were other interesting books on the classic salmon fly from across the Pond that contained much information on both salmon and trout fishing and fly-tying, such as Genio C Scott’s Fishing in American Waters (1869) wherein a plate (not coloured) of a number of classic salmon flies can be found on page 307.

What’s interesting about this find is that not only are strip-wing flies featured but also realistic insect renditions – something I wasn’t aware of for catching salmon.

Also of interest is Robert Barnwell Roosevelt’s Game Fish of Northern States and British Provinces (1884), which included much information about trout, salmon and other game fish. Starting on page 273, Roosevelt presents a long list of Canadian classic salmon fly recipes but, alas, unaccompanied by etchings of the flies.

Of great interest to hook makers, though, are a number of fine plates of hooks in the appendix on page 317 (O’Shaughnessy forged hooks) with sizes from small trout hooks up to 8/0 salmon irons. Another fine plate of hooks can be found here on page 321 – again, made by O’Shaughnessy. 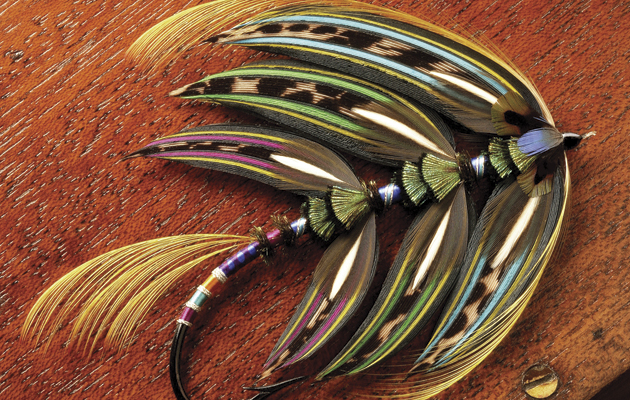 I cannot finish this piece without acknowledging my great appreciation of George M Kelson’s work on the classic salmon fly: The Salmon Fly (1895).

This not only contained a huge number of fly patterns but also sported quite a few chromolitho plates – very colourful – of classic Atlantic salmon flies.

These are, again, rather creative renditions similar to those found in the book by Sandeman although they are a bit more realistic in appearance.

Kelson’s book was a true landmark work on the salmon fly and its influence on the modern-day salmon fly-tying community is still important.

Plus, Kelson included an interesting treatise on how to tie these patterns in-hand and certainly inspired a few talented and fearless modern-day tyers to try tying them without a traditional fly-tying vice.

Just as developments in classical music continue to this day, so does the art of tying the classic Atlantic salmon fly.

Modern tyers produce new and, in many cases, highly artistic salmon flies meant to catch the eye rather than the fish. I can only try to imagine what salmon flies will look like 10, 20 or 50 years from now. I wish I could live long enough to see them.

Lähde: Classic salmon fly: the art and the history – The Field