You can tell a lot about a deer’s mood simply by watching its body language.

If you’re new to hunting whitetail deer with archery gear, it won’t take long to learn that deer can use complex body language to rob you of even the easiest shot opportunities.

If you happen to be a veteran whitetailer, chances are about 100 percent that deer have used that cunning to leave you cussing after a blown shot at a wall-hanger buck.

Studying all the nuances of whitetail body language, from the most subtle acts to the obvious, will turn possible failures into future bowhunting successes. Let’s start with the whitetail hunter’s body language nightmare — spookiness. 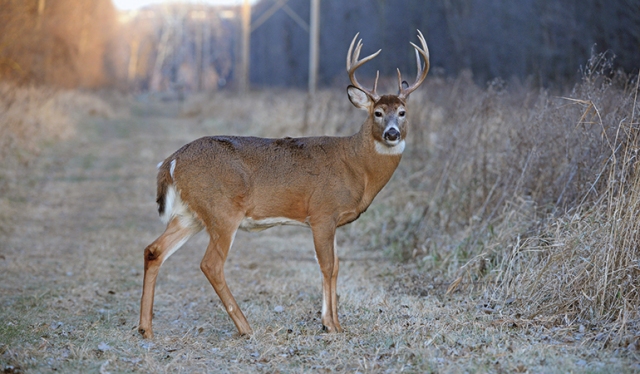 Deer that are hunted frequently quickly learn to vacate stand sites at the slightest sign of hunters, whether it be via the whitetail’s ultra-sensitive snout, finely honed hearing, or eyesight.

How do you know how soon a buck will vacate the area?

Well, if the wind is solidly in your favor, keep your eyes on his eyes and ears. Whitetail bucks, especially mature ones, seem to have a sixth sense when it comes to locating even the most well-hidden hunters.

A buck that is about to saunter into one of your shooting lanes then abruptly hangs up, may not bolt if his eyes, ears, and snout tell him there’s no predator about.

However, if any one of his senses are alerted, his eyes will widen and both his ears will train on you like furry radar dishes.

If he stretches his neck to full length while staring you down, it’s probably over — that’s pre-bolting behavior.

But if a buck keeps his head at a natural level, he may just come in once his senses haven’t detected a threat.

Or, he may ease closer to play body language cat-and-mouse, where he puts his head down to feign a calm feeding posture, then snaps it back up to continue the stare down.

This can be repeated many times if a buck has seen or heard something out of place but can’t smell it.

Many bowhunters fall for this tactic and are caught at mid-draw while the buck makes a hasty exit. Of course, if he does smell you, the deal is over anyway! Then the deer will display the worst spookiness traits — snorting and tail-flagging. 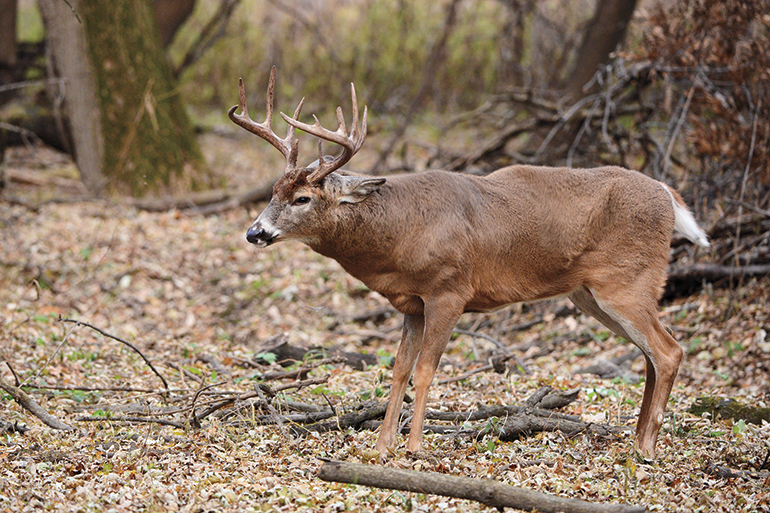 This rough-looking dominant buck has his ears clamped tightly back against his swollen neck in a pre-charge warning to an interloping rival buck.

When you see a deer raise that big white flag, that’s his way of signaling every other deer in eyeshot that danger lurks close by.

Snorting reinforces the flag and jolts any nearby deer into joining the spooked buck in fleeing the woodlot.

If a buck clamps his tail down or walks stiff-legged and stomps a front leg, you can be sure his anxiety level is through the roof.

If you do manage to get drawn and execute a shot at a buck like that, make sure to aim low, as those deer are sure to drop like a rock at even the quietest bow’s report and duck the arrow.

An excellent sign a buck’s going to continue coming is when those large ears begin to relax and go back to swiveling in other directions, and his tail relaxes and hangs limply. Then you’ll be witnessing a bowhunter’s favorite whitetail body language — contentment.

Calm whitetail deer aren’t the wide-eyed creatures they are when alerted to a threat.

The eyes of a content deer can appear to be half open, and in the case of some really contented bedded deer, sometimes nearly closed. Also, besides hanging loosely, their tails will gently swish from side to side, much like a cheerful dog’s.

I’ve taken to dubbing this behavior “happy tail,” and I know I’m going to get a shot whether I’m carrying my longbow or a camera system when I see it. It’s a surefire indicator of an unconcerned deer.

Whitetails show calm in other ways, too

A buck that stops to rub trees on his trail will often close his eyes while he places scent on the tree.

If no other deer are near, his body can be relaxed while he concentrates on the rub. Oftentimes, a rub can be cat-nip to a buck.

Post-rut bucks that were bitter rivals just days before can show contentment through interaction with each other. Many times bucks will spar amicably, or show calm by preening and smelling one another while feeding.

A buck that has stopped to groom his hide by licking and chewing debris from it won’t do it unless he’s totally at ease.

This behavior is almost at the top of the whitetail’s composure list.

If you observe a bedded buck that has extended his front legs and closed his eyes, perhaps even resting an antler on the ground, congratulate yourself! This means you’ve done a great job of concealing both your form and scent, and are witnessing the pinnacle of relaxed deer behavior.

But, what if that same buck suddenly springs from his bed with a ruffled hide and raised hackles? That says he’s just scented a rival buck and is showing signs of another type of body language — ire.

During the rut, it doesn’t take much to transform a peaceful buck into a fiery one. If he’s with or seeking out a doe, any other buck that passes by will raise his anger level exponentially.

How do you know when a buck is angry? Again, look at those ears and eyes.

Standing downwind from an estrous doe, this massive buck takes in her scent and licks his upper lip with urgency.

The initial sign of whitetail aggression is when the ears drop and lay back.

Secondly, their eyes will roll back enough to display the whites, and their hides will puff out, standing their hairs on end. This makes the deer appear larger to an opponent and leaves no doubt as to his serious intentions.

If the buck has his ire pushed far enough, he’ll start a charge at a rival by slowly sidling in a stiff-legged gait toward his opponent. If that happens between two evenly matched bucks, keep a sharp eye out as you’re about to witness a true knock-down battle.

Other signs of whitetail rage include flared nostrils, a tail clamped down tight, and lip-curling that’s sometimes accompanied by snort-wheezing.

The snort-wheezing is a verbal warning to another buck to back off, and oftentimes it’s the precursor to a power-packed charge. Having an irritated buck in bow range is actually preferred to a calm one, as he will be preoccupied and focused on another deer, and not on you.

You are most likely to view miffed bucks during the rut. It’s also when bowhunters get a ringside seat to see whitetail mating body language. Of all the behaviors, this one has the most facets.

Probably the most recognizable of these is the flehmen response

When a buck finds himself downwind of an estrous doe, he’ll raise his head high and drink in her aromas by inhaling deeply and curling his upper lip.

And, if the doe is right on the cusp of breeding readiness, a buck will lick his upper lip with urgency. Regardless of whether the buck is reacting to breeding scent placed by a bowhunter or a genuine doe, his attention will be riveted on the scent.

Rutting bucks cover a ton of territory looking for does, and when they cross a live scent trail they’ll put their heads down and follow the track to the exclusion of just about everything else.

This behavior is dubbed “bird-dogging,” because it mimics the actions of a hunting dog on a fresh track. Once more, this will concentrate the deer’s senses away from you, but you may end up with a moving shot — unless you can halt him with a grunt.

Contrary to myth, whitetail bucks continue to rub trees in the heart of the rut. They do this to deposit scent and leave a marker.

When a buck has a doe locked down, it is not uncommon for him to circle her and rub trees with the same veracity as he did in the pre-rut.

Why do bucks rub in the presence of a hot doe?

After a buck has a doe locked down, it may be some time before she reaches peak estrus. So, the buck will release tension by hammering trees with his antlers. Additionally, this spreads his scent and warms him up for battles against opponents that may try to move in on his doe.

Before whitetail bucks lock down does, they begin the rut by making and maintaining scrapes.

Generally, bucks look to start scrapes below trees with branches that are within browsing distance. Once they locate a suitable location, bucks energetically paw out patches on the forest floor until they reach dirt.

Once that’s achieved, they’ll stand over their work, push their back legs together, and urinate over the scent glands in their hocks so that it soaks into the scrape.

At the same time, they will place pre-orbital (eye gland) scent and saliva on the overhanging branches and prefer to use just one — a licking branch.

They may even stop to rub the tree trunk during the scrape-tending process, or even munch on any leaves left on the branches.

They’re also complex and cagey animals for bowhunters to match wits with. Learning as much as possible about their multifaceted body language may be equally as important as scouting.

Learning to understand whitetail body language will not only increase your bowhunting enjoyment but also significantly up your odds of hanging a tag on a buck.