Europe’s last primeval forest is facing what campaigners call its last stand as loggers prepare to start clear-cutting trees, following the dismissal of dozens of scientists and conservation experts opposed to the plan.

Poland’s new far right government says logging is needed because more than 10% of spruce trees in the Unesco world heritage site of Białowieża are suffering from a bark beetle outbreak. But nearly half the logging will be of other species, according to its only published inventory. 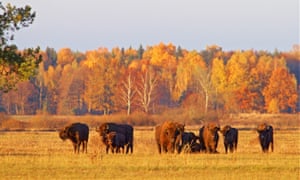 Oak trees as high as 150 feet that have grown for 450 years could be reduced to stumps under the planned threefold increase in tree fells.

Its foliage stretches for nearly 1,000 square miles across the border between Poland and Belarus.

Beneath its green canopy, sunlight filters down on to a panorama of skyscraper trees soaring as much as 180 feet into the air, swampy water pools dammed by beavers, and psychedelic fungi that sprout from tree trunks.

But a recently-passed logging law to allow work to begin on the old-growth forest has divided families, and led to death threats against campaigners and allegations of an “environmental coup” by state interests linked to the timber trade. The logging in Białowieża is expected to raise about 700m złotys (£124m), and pave the way for extensive and more lucrative tree clearances.

Sources say that internal government discussions have already begun on extending the new timber regime to the national park, which covers 17% of the forest and has been untouched by humans since the ice age.

Mirosław Stepaniuk says he was sacked as director of Białowieża’s national park shortly after Polish elections six months ago because of his support for turning the whole forest into a protected conservation area.

He told the Guardian: “An environmental coup is being staged here not just by the government, but by the national forestry authority. If they are successful, it could trigger a cascade, an avalanche of similar cases in other places.”

Last week, another 32 members were dismissed from the state council for nature conservation, an advisory body which had opposed the logging plan and has been accused of “inefficiency”.

“We were sacked because the new government needs scientists who will applaud increased logging, to convince public opinion that this insane idea is okay,” said Przemysław Chylarecki, one of the dismissed scientists.

Most of the new council member are foresters, or colleagues of the environment minister, he added.

Since taking office, the government has set up a new Scientific Council of Forestry but it may not be minded to challenge the logging plan. Its president, Prof Janusz Sowa, said in February: “There is [only] one method for managing forests: an axe.”

The new Law and Justice party government is already in conflict with the EU over issues ranging from climate change policy to constitutional interference in the country’s courts and media, which is widely seen as undemocratic.

Now, Brussels is weighing a separate court case over the law allowing 188,000 cubic metres of trees to be felled by 2021. The axe could fall on trees dotted around at least a quarter of the Białowieża forest area, excluding the national park, and possibly as much as two-thirds of it.

Katarzyna Jagiełło, a spokeswoman for Greenpeace, told the Guardian: “The struggle to protect Białowieża and make it a national park is our Alamo. This place should be like our Serengeti or Great Barrier Reef. What happens to the forest here will define the future direction of nature conservation in our country.”

Significantly, Greenpeace refuses to rule out direct action if the foresters move in. “Right now we are present in the forest,” Jagiełło said, “and whatever needs to be done to protect it, will be done.”

With the logging law now passed, the battle for its future could begin at any time.

The forest occupies a symbolic and almost mystical place in Poland’s national consciousness, and its fate stokes dangerous emotions, according to Joanna Łapińska, a 37-year-old librarian in a Białowieża group opposing the clearances.

“Friends and families have fallen out over this,” she said. “When we were out petitioning recently, a sympathetic woman said ‘I can’t let you in because I don’t want a fight with my husband’.”

“People connected with the foresters are very aggressive. They told us that we are eco-terrorists, paid by the Germans – it’s usually the Germans, Jews or Russians – and they even said that somebody should have killed some eco-activists.”

At a conference organised by the national forestry authority in December, a former forester and beekeeper close to Jan Szyszko, the environment minister, received loud applause when he said that environmental experts “should be beheaded or put in jail for 25 years. They should be deported for what they did against the forest”.

At the same meeting, Mikołaj Janowski, a councillor from Podlaskie, told environmentalists: “You are parasites. You get money for your incomprehensible, hostile scientific papers … You should be sent to Putin’s gulag for 10 years or more.”

Revulsion against environmentalists has reached the highest levels of government. Earlier this year, the foreign minister, Witold Waszczykowski, told Bild newspaper: “We only want to cure our country of a few illnesses … a new mixture of cultures and races, a world made up of cyclists and vegetarians, who only use renewable energy and who battle all signs of religion.”

Sections of the Catholic and Orthodox churches have played a partisan role in the debate, with a passage from Genesis – “be fruitful, and multiply, replenish the earth and subdue it” – often used to justify increased logging.

One orthodox priest from Hajnówka, Leonid Szeszko, recently called for scientific, environmental and NGOs which opposed the logging plans to be banned.

Szyszko, who has championed the logging law, is a regular guest on the ultra-conservative Radio Maria, a Catholic radio station, and appears at conferences with a priest garbed in a forester’s green uniform.