Chimps beat up, murder and then cannibalise their former tyrant | New Scientist

It was a gruesome scene. The body had severe wounds and was still bleeding despite having been lying for a few hours in the hot Senegalese savanna.

The murder victim, a West African chimpanzee called Foudouko, had been beaten with rocks and sticks, stomped on and then cannibalised by his own community. 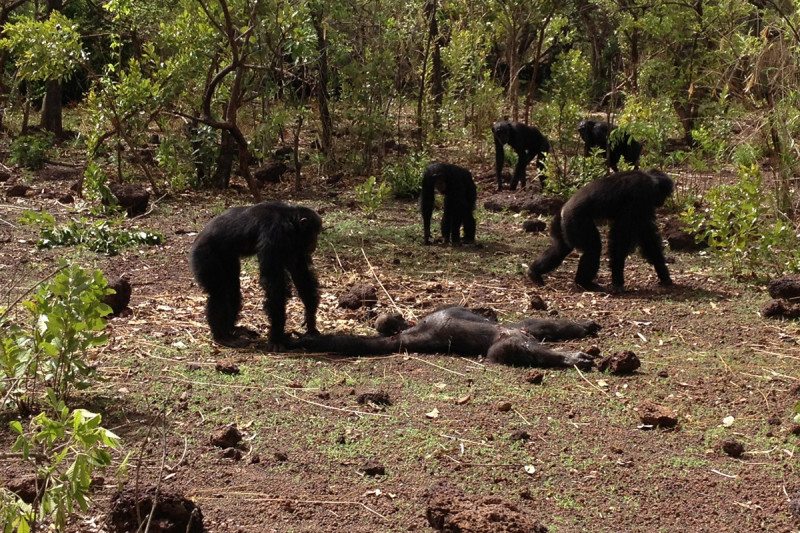 This is one of just nine known cases where a group of chimpanzees has killed one of their own adult males, as opposed to killing a member of a neighbouring tribe.

These intragroup killings are rare, but Michael Wilson at the University of Minnesota says they are a valuable insight into chimp behaviour such as male coalition building.

“Why do these coalitions sometimes succeed, but not very often? It’s at the heart of this tension between conflict and cooperation, which is central to the lives of chimpanzees and even to our own,” he says.

Chimps usually live in groups with more adult females than males, but in the group with the murder it was the other way round.

“When you reverse that and have almost two males per every female — that really intensifies the competition for reproduction. That seems to be a key factor here,” says Wilson.

Jill Pruetz at Iowa State University, who has been studying this group of chimpanzees in south-eastern Senegal since 2001, agrees. She suggests that human influence may have caused this skewed gender ratio that is likely to have been behind this attack. In Senegal, female chimpanzees are poached to provide infants for the pet trade.

Thirteen years ago, Foudouko reigned over one of the chimp clans at the Fongoli study site, part of the Fongoli Savanna Chimpanzee Project. As alpha male, he was “somewhat of a tyrant”, Pruetz says.

Foudouko gained alpha status in his late teens and ruled alongside his right-hand chimp, Mamadou, the group’s beta male. In 2007, Mamadou was severely injured and separated from the group for weeks, returning frail and holding a lower rank in the social hierarchy.

Because Foudouko maintained an alliance with his now-weak partner, he was ostracised and then ousted by the others. He lived alone on the outskirts of chimp society for years, only being observed by researchers in the field once or twice a year.

Chimpanzee groups at Fongoli are fairly isolated, so Foudouko’s only chance of finding a mate was to rejoin the group. By 2013, Mamadou had regained beta male status and his brother, David, had taken over as alpha. They accepted Foudouko back into the fold, although other members of the group still chased him off periodically.

“We just happened to have at the time five young males all coming up in the hierarchy and those guys together didn’t want to let Foudouko back in,” says Pruetz. “He was trying to come back in at a high rank, which was ultimately a foolish thing to do on his part.”

Early one morning, Pruetz and her team heard loud screams and hoots from the chimps’ nearby sleep nest. At dawn, they found Foudouko dead, bleeding profusely from a bite to his right foot. He also had a large gash in his back and a ripped anus. Later he was found to have cracked ribs. Pruetz says Foudouko probably died of internal injuries or bled out from his foot wound.

Foudouko also had wounds on his fingers. These were likely to have been caused by chimps clamping them in their teeth to stretch his arms out and hold him down during the attack, says Pruetz.

After his death, the gang continued to abuse Foudouko’s body, throwing rocks and poking it with sticks, breaking its limbs, biting it and eventually eating some of the flesh.

“It was striking. The female that cannibalised the body the most, she’s the mother of the top two high-ranking males. Her sons were the only ones that really didn’t attack the body aggressively,” Pruetz says, adding that Mamadou even tried to wake his old partner.

“Do chimpanzees understand death? It’s not clear if they do,” says Wilson, who studies chimpanzees in East Africa. “It seems unlikely that they know about using pulse or breath to make sure something’s dead, so we do see them beating on individuals they’ve killed after they’ve expired. But the cannibalisation was unusual.”

Pruetz says since Foudouko’s death, Mamadou has been kicked out of the group by the same young males who attacked his past ally.

“The way the chimps behave is the way they used to act with Foudouko [when he was trying to re-enter the group]. The saga continues,” she says.

Lähde: Chimps beat up, murder and then cannibalise their former tyrant | New Scientist