And, since you ask, officer, there is indeed a very good reason why I need each and every one of my five shotguns. 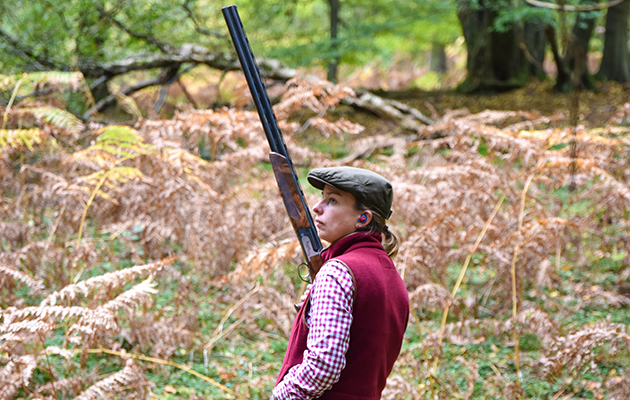 FITASC champion Cheryl Hall, like all other clay shooting competition specialists, male or female, shoots a 12-bore, which is more competitive.

The Churchills are for grouse and partridge shooting early in the season (and for showing off); the Ariettas are for driven pheasant as the season progresses and rough shooting over my dogs; the 12-bore is for clay shooting and lending to guests of a results-oriented persuasion.

So far so incredibly spoilt.

What I dread is the next government crackdown that will force me to choose to keep just one of my double-barrelled friends.

Would it be the Churchills for their beauty, vintage, craftsmanship and speedy swing?

Or the Ariettas for the ease of lugging one up yet another Monroe?

Or the 12-bore, because anyone can use it?

Should the dreaded day ever come, you can be sure that one thing will not be considered among my selection criteria, and that is the fact that I am a girl.

Yet ever since women began to get seriously involved in shooting in the 1980s, it has been assumed (by men) that gender would be the first element considered when buying a gun.

And, worse still, that taking that into account would mean always selecting a 20-bore.

Heads up, chaps: the continuing stream of medals brought home by our girls from shooting competitions all over the world have all been won using 12-bores.

She was generous in her praise of her (pink) cartridge suppliers, Eley, and, most of all, she hearted Beretta, makers of her 12-bore skeet gun.

Like all other clay shooting competition specialists across the disciplines, male or female, they shoot 12-bores.

Anything else would simply be uncompetitive – not a look that appeals to our girls. Perhaps the most competitive of them all is Nicola Heron, multiple champion and national director of the Clay Pigeon Shooting Association.

Yet, when asked about shotgun selection for women, she doesn’t consider the choice of 12-bore or not to be the most important decision. “Any woman can shoot any type of gun providing it fits them perfectly,” stresses Heron.

“The most important consideration is whether you are shooting for fun or for competition. For example, if you want to shoot any Trap disciplines seriously you won’t progress far using a Sporting gun. Likewise, a long-barrelled Trap gun would not really be suitable for an Olympic skeet shooter.

And, in reality, as your skills improve, your choice of what you want to shoot may change. So, girls, look forward to changing guns or adding to the stable.”

There are more uses for a shotgun than shooting competition clays, or shooting fun clays, or driven pheasant. You might not even be shooting pheasants at all but rabbits over a spaniel, grouse over a pointer or basically anything that moves and is legal.

You can have big fun with a big gun in clay disciplines where the target is easy to access, predictable and pre-mounting is an option.

But when the quarry could pop up as you fight your way through a bramble thicket and mounting at all is a bit sketchy, manoeuvrability is paramount.

So women have learnt to be flexible in the choice of gun and to prize fitness for purpose over any amount of big numbers and technical specifications.

Sporting publicist Selena Barr is typical of the modern female gun: “I tend to change gauges depending on what I am doing. I am only 5ft 3in so I like to surprise people by shooting with a 12-bore.

The 12-bore is ideal for clays, especially now that manufacturers are bringing out models specifically designed for women.

But for walked-up I do prefer a lighter gun, especially on grouse where the terrain can be very rough. The smaller size of the 20-bore is easier to carry around – some of the longer barrelled 12-bores can be quite cumbersome in the heather.”

Lucinda Southern is a keen gameshot as well as the founder of Gundog Girls.

She stresses the need for the smaller, less noisy bores when dog training, “especially when you come to shooting over the dogs, I would use a 20-bore. But really it’s a matter of preference and dependent on the quarry. If the gun fits, so to speak. And a 12-bore is my choice for the peg.”

Emma Perrott’s experience is a working example of fitting the gun to the shooting requirements rather than to a preconceived idea of 12-bore or 20-bore being “better”.

Her main activities are deer control and rough shooting in upland Britain, and her expertise is behind new wild food restaurants in Stratford-on-Avon and Bath.

As a hardy stalker, Perrott isn’t impressed by size. Instead, her shotgun shooting is with a 20-bore. “It was my first ever gun of my own. I use it for various game shooting and also clays. It fits me really well and I get on with it so it’s never occurred to me to change it.

I am only 5ft 1in so it’s far more in proportion for me to handle than my dad’s 12-bore Silver Pigeon that he used to teach me with.”

Anne-Marie Heelis is contributing a new woman’s gun to the legacy of female stock by having her own gun custom-built for her by Boxall & Edmiston.

Given that Heelis hasn’t had to make compromises over gun selection, it is illuminating to hear her values in making her choice. She explains: “I have girl friends who shoot 12-bores and male friends who shoot 20-bores.

Then I got a Beretta 20-bore and thought I will never need to buy another gun, it will last forever.

It wasn’t perfect, though. With shooting experience I formed a very clear idea of exactly what I wanted in a gun, and nothing off-the-peg had all the features I wanted.

Then, at a gun show, I saw a bespoke 20-bore and it was so beautiful and also ticked all the technical boxes.

I thought about it for a year, trying to justify it to myself. Both my parents died quite young and it has taught me to live in the present. So I have given it to myself as a 45th birthday present and hope to enjoy it for 30 years at least.

“For me, it is just as much about how it looks, because you are handling a beautiful piece of craftsmanship.

So although I wanted an over-and-under, I did still want all the craftsmanship you would expect with a traditional side-by-side – that is colour case hardening and lockplate engraving and gold filigree, and when I saw they had produced that with a round action combined with modern functionality, that is the marriage of form and function I wanted.

On my previous 20-bore I was getting barrel flip, and Peter Boxall has solved this. And he has engineered a solution to the problem you get reloading so many over-and-unders that the bottom barrel isn’t always opening fully for quick reloading.

I can also fire heavier loads through it without noticing any difference in recoil or the way the gun behaves. I like to be individual and I get great satisfaction from knowing that my gun is equally individual.”

Heelis has pinpointed what is probably the only real difference in the sexes when it comes to gun choice.

Women are not geeky about guns.

Size in itself does not impress them. Arts & Crafts designer William Morris said: “Have nothing in your houses that you do not know to be useful, or believe to be beautiful,” and we feel the same about what we have in our gun cabinets.

Gender equality is all about the right to choose. Many men choose to shoot with a 20-bore or a .410.

Many women shoot with a 12-bore. It’s not a question of the relative merits of the gauge, it’s all about how you identify. Personally, I identify as 20-bore, perhaps a little 12 curious.