Although there was never any question as to whether my two girls would hunt, my first step was teaching them how to shoot a bow. However, a problem developed when they stepped up from shooting a kid’s bow to a hunting bow. 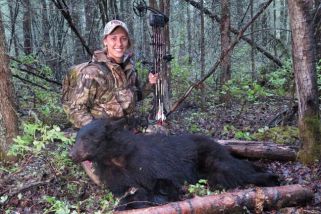 My home state of Maryland requires a minimum draw weight of 30 pounds. For both girls, the 30-pound draw weight was way too much at nine years old.

Instead of missing out on bowhunting opportunities, I decided to start them out with crossbows.

Now, before anyone stops reading this because of the crossbow debate, let me explain what happened.

Then, something caught me off guard. Although the girls were three years apart in age, at 14, both of them independently asked me the same question, “Daddy, I think I can shoot a real bow.

Can we go to Cabela’s and get one?”

At this point in their lives, I knew they were going to be diehard, vertical bowhunters just like their dad. Obviously, the apple did not fall far from the tree.

Fast-forward 10 years, and yes, both girls are still hunting. As I now reminisce on their hunting careers, it wasn’t too long ago when the girls and I were on our first deer hunt in a ground blind playing rock, paper, scissors and some handheld computer games.

Watching each of my daughters mature as hunters and harvest their first deer is something that will forever be etched in my mind. This special bond we share is something none of us takes for granted. Like many kids, my girls love the outdoors, and spending time hunting with their dad.

Both girls have now taken their fair share of deer, and I’ve sensed their need to move on to something new in advancing their bowhunting careers. The answer was clear — bears and antelope. Since both these hunts can have a high success rate, the girls were super pumped about the opportunity to hunt something besides deer.

My oldest daughter, Hailee, is in college, so we needed a hunt that would fit her schedule. Although there are many wonderful bear camps, we decided on Jeff Downing, owner of True North Outfitters in northern Alberta, Canada. The previous year, Bowhunter TV filmed me taking a 400-pound black bear with them. Could lightning strike twice?

This hunt was conducted out of wall tents, and transportation to the bait sites was by boat. Downing’s camp is located so far north, sunset actually comes at 10:30 p.m. Each day started with us getting up around 9 a.m., eating breakfast, and helping re-bait all the sites.

After two days, Hailee had passed up several small bears. It started to rain on Day Three, and Downing explained to us that this would most likely reduce the number of bear sightings. Sure enough, after two days of rain, his prediction was dead on.

Before we knew it, we were down to the last day of our hunt. A bear Hailee had originally passed on came in from behind her treestand. With the bear only 12 yards away, she drew and anchored. Once the bear stepped over a log at the bait, she watched her Lumenok-equipped arrow bury deep behind the bear’s shoulder. As the bear ran out of sight, uncontrollable shakes took over Hailee’s entire body.

As luck would have it, I happened to be with Downing when he received a text from Hailee letting him know she had just shot a bear. Within seconds, we were on our way to her stand.

Although Hailee was fairly certain the bear was dead, she and her cameraman couldn’t find it after 30 minutes of tracking. Because the woods were so dense with spruce trees, Downing suggested we parallel one another along the well-worn path where the bear had exited the bait site. Within five minutes, I found Hailee’s bear.

As Hailee approached her bear, the look on her face said it all — pure euphoria! Her first bear wasn’t a giant, but that didn’t matter. The bear hug we shared expressed the jubilation each of us was feeling at that exact moment.

With daughter number one more than happy with her dad, it was Jesse’s turn. She wanted to try her skills on a speedy pronghorn antelope, so I arranged an August hunt with Brad Kooiman from Extreme Dream Outfitters. Kooiman has over 144,000 acres of private, leased land located an hour south of Gillette, Wyoming.

A problem quickly developed during the first day of our antelope hunt — rain! As any antelope hunter knows, this is terrible news because waterholes were now everywhere. Kooiman tried to encourage us by saying, “The majority of my hunters are finished within two days. The more time you can spend in the blind, the better.” 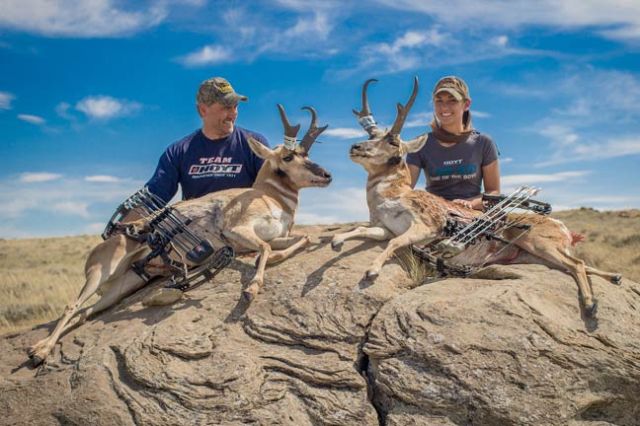 Our plan of attack was to hunt from 5 a.m. to 8:30 p.m. If you’re bad at math, that’s 15½ hours each day! Worse yet, both Jesse and I had a cameraman with us to record the action in our wooden ground blinds. Even for experienced hunters, this lengthy sit in a blind is tough. If you don’t believe me, just try it!

After three days of this endurance test and no goats on the ground, to say I was proud of Jesse is a total understatement. Then, on the last day of the hunt our luck changed. The morning sun wasn’t even up for 30 minutes when Jesse looked out her blind’s side window. Without wasting a word, she turned to her cameraman and said, “Turn the camera on!”

As if on a mission, a buck was only 30 yards away, coming directly to her waterhole. Earlier, Kooiman had told Jesse that it was very possible she would have a six-yard shot.

And that is exactly what happened.

As she was drawing, her cameraman realized he had to share the same vertical opening in the blind because the buck was too close. With both of them right up against one another, this awkward positioning brought into question whether the six-yard shot would even happen.

Just then, the buck took one more step and lowered his head to drink. This allowed Jesse and her cameraman to share the window, and within a split-second Jesse’s arrow was on its way.

After a 100-yard dash that ended in a face-first cloud of dust, Jesse had just killed the largest antelope taken on the ranch in the past three years. Her 76 2⁄8 buck will now grace her bedroom wall.

Just like Jesse, I started off the last morning of our hunt with some luck. By 7:30 a.m., I had a buck circle my blind three different times. After 45 minutes, the buck finally committed and presented me with a 7-yard shot at the waterhole. My shot was good, and the buck tipped over after sprinting 75 yards.

After getting back to camp I could hardly wait to see Jesse’s buck. Upon seeing my daughter holding her well-deserved trophy buck, I’m not one bit ashamed to say I cried like a little boy. And, for the record, the goat I took was the buck Jesse passed on the day before.

My buck ended up scoring 68 5⁄8. Yes, Jesse actually passed on a Pope and Young-class buck.

The highlights of these hunts are my girls’ desire to set a goal and earn it through hard work. The joy of having my girls by my side, and reminiscing about these times, still brings a smile to our faces.

This article is about girls who hunt, and the need for fathers to make time to hunt with their kids. The hunting spark, and the companionship among all hunters, is an investment that offers exponential benefits in character and self-reliance.

Whether you harvest something or not, the camaraderie is the real trophy that will last forever. Isn’t that what hunting is all about — sharing our passion with our kids and friends?

For me, there’s nothing more impressive than a motivated, well-armed young lady who knows where to place a shot, has ice water in her veins, and knows how to tip over big game.

Anyone with daughters realizes that sooner or later, hunting with Daddy will no longer take place, and she’ll hunt with someone much younger. And when this happens, my girls have a prerequisite for boyfriends…he has to have lots of property to hunt!