A new species of wolf has been discovered in Africa after exhaustive DNA and morphological analyses revealed it is evolutionarily distinct from the Eurasian golden jackal, which it strongly resembles.

The Canid family — wolves, coyotes, jackals, foxes, domestic dogs and others — are so familiar to us, and have been so intensively studied for so long that you might think that we know almost everything there is to know about them. But a paper published today in Current Biology belies that assumption. This paper describes the meticulous research conducted by an international team of experts who report a surprising discovery: a new species of wolf.

According to the authors, two golden jackal populations — one in Eurasia and the other in Africa — split more than one million years ago, which is sufficient to formally recognise each as separate species.

Adding to the confusion, African golden jackals are strikingly similar in appearance to their more distant relative, the Eurasian golden jackal. This strong physical similarity has long been the source of confusion over these animals’ taxonomy and evolutionary relationships.

The evolutionary relationships of canids are poorly understood

The evolutionary relationships, or phylogenetics, of jackals have long been a mess, according to Adam Hartstone-Rose, an Associate Professor of Cell Biology and Anatomy at the University of South Carolina School of Medicine, who was not part of the study. Traditionally, most taxonomists have recognised three jackal species: the black-backed, side-striped and golden jackals — all of which live in Africa, with the golden jackal also ranging throughout much of Eurasia.

“The three ‘species’ were considered close relatives based mostly on their similar body size and morphology”, explained Professor Hartstone-Rose in email.

“However, as the first molecular analyses of canids became available, it was obvious that ‘jackals’ are only similar based on amazing morphological convergences”, said Professor Hartstone-Rose.

“The side-striped and black-backed species (historically called Canis adustus and C. mesomelas respectively) turn out to have split off of the stem of the large Canis group before the highly derived hunting dogs (Lycaon) and dholes (Cuon)”, said Professor Hartstone-Rose.

Two earlier studies reported that golden jackals found in Africa are more closely related to grey wolves than to the golden jackals found in Eurasia (doi:10.1371/journal.pone.0016385 & doi:10.1371/journal.pone.0042740). These studies inspired Klaus Koepfli, a Research Associate and Visiting Scientist at the Center for Species Survival (CSS), which is part of the Smithsonian Conservation Biology Institute, to investigate more thoroughly.

“Those studies had only used one kind of genetic marker, sequences from the mitochondrial genome, which are only inherited through the maternal lineage”, explained Dr Koepfli in email.

“Evolutionary history is best verified through concordance among genetic markers from across the genome that are inherited maternally, paternally and bi-parentally and that evolve at different rates to capture different stages of divergence. Therefore, we wanted to test the conclusions of the two previous studies by adding data from the nuclear genome”, said Dr Koepfli.

The researchers started by generating new sequence data (sampling sites are indicated with red dots in Figure 1B) for canid cytochrome b, a gene in the mitochondrial genome, and combined them with sequences from the two previously published studies (doi:10.1371/journal.pone.0016385 & doi:10.1371/journal.pone.0042740). Their analysis of these data incorporated a total of 104 cytochrome b sequences (1,140 bp each) to reconstruct a phylogeny (Figure 1A), for golden jackals from both Africa and Eurasia: 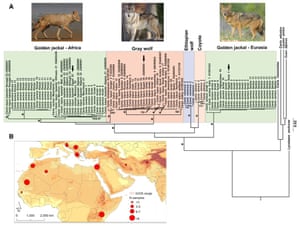 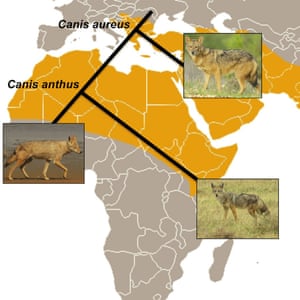